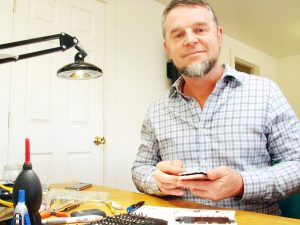 BELFAST — Before a recent explosive snowstorm, George Farley drove up from Union to Midcoast iPhone Repair on Searsport Avenue to see about the broken speaker in the iPhone he had bought from a friend. “Evidently, it’s been in water,” he said, dryly, after the store’s owner and Chris Quimby had taken a look inside.

Farley drives a plow, and on the eve of the ballyhooed “bomb cyclone,” he needed something to communicate with other trucks in his fleet. Quimby figured he could fix the speaker, but he worried about the extent of the water damage. Instead, he offered Farley a used blue iPhone 5C — an “upgraded downgrade,” he said — for $100. Farley had paid the same amount for his damaged phone, and his friend, after hearing what had happened, had offered him a refund. It was a wash. Farley handed over a crisp hundred-dollar bill.

Quimby started Midcoast iPhone Repair about three years ago, “just for hobby income, because I thought that’s all it would be,” he said. “But people kept coming to me, and it kept growing.”

After several years of working from his car and a small office in Rockland, he opened a shop at 22 Searsport Ave. last November. Leaving the generally wealthier clientele in Camden and Rockland was a gamble, but Quimby, who lives in Brooks, hoped the greater visibility of a storefront on Route 1 would make up for the loss of any old customers. As it turned out, people in Belfast break their iPhones, too, and many of his old customers followed him up the coast.

Suzanne Stone, who lives a few blocks from the store, dropped in after getting “a small amount of snow” on the already cracked screen of her iPhone 4. Screen replacements make up a large share of Quimby’s business, but the iPhone 4 is old enough that Quimby often recommends people put their money toward an upgrade. He also realizes that a person’s relationship with a smartphone often carries a disproportionate weight in the decision.

“For some people, a smartphone…

Click here to read the rest of the article…